When you think Austria, you probably think immediately of beer. Which is the right connection to make, but what you might not realise is that Austria also has a flourishing wine industry. Grüner Veltliner is the dominant white grape, producing dry whites, but there are multitudes of other varieties, from red to white to sweet to dry and beyond.

At the beginning of November, people from all over flock to the area around Lake Neusiedl in Burgenland (the Austrian state just below Vienna). Unlike much of Austria, this area is devoid of towering mountains, with a milder climate and a 315km² lake that stretches all the way to Hungary, and is apparently so shallow, you could walk there!

And the reason why people come at this time of year? Wine, of course! It is the annual ‘Martiniloben’, born from earlier times, when on the feast of Saint Martin (November 11), winemakers would descend their cellars to sample the first taste of the year’s young wine. In celebration of this, the cellars in the region now throw open their doors for ‘Tag der offenen Kellertüre’ (day of the open cellar doors). 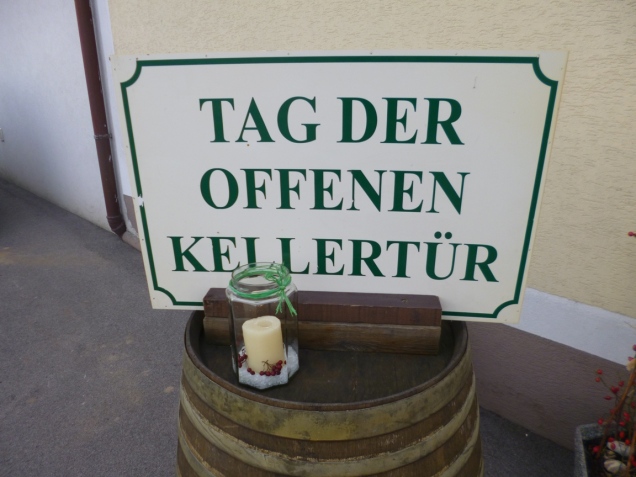 My inlaws have been attending this event for more than ten years in the charming, lakeside town of Podersdorf, and this year (my second) we were a group of ten, excited like kids at Christmas at the prospect of hours upon hours of wine tasting. The cellars officially open on Friday at 3pm, so naturally a 10am departure made perfect sense (approx. 3.5 hours’ drive) to ensure we would be appropriately fed and watered before embarking on the start of our wine journey at exactly 3 o’clock. We feasted on a late lunch of schnitzel and cordon bleu (this was a necessity following the previous year’s disaster, whereupon after not eating a proper lunch, I proceeded to fall asleep on the table at 9pm), and trotted off to the first cellar.

For a 38€ fee, you’re covered for the weekend and while the price might seem high, it also includes 24€ of wine vouchers (which could easily buy you 4-6 bottles of wine), making the real cost only 14€ for two days (potentially 12 hours in total) of wine tasting. You receive your ‘pen’ which gains you permission to all 16 cellars in Podersdorf, and serves as an additional purpose to write notes on which wines you like best. I find that my notes tend to get more and more flamboyant as the night goes on, and by the end of the weekend, they barely make any sense at all!

We were on a strict ‘schedule’, enforced by my father-in-law, to ensure we would get around to as many wine cellars as possible, while being able to taste the maximum number of wines. Following my near-obliteration of the year before, I took it easy, opting for a few different tastes at each cellar, rather than pushing through the whole range!

Each cellar differs in size, look and character… some separate the white from the red, some allow self-pouring (very dangerous), others pour it for you. All offer some kind of food, and in traditional Austrian style it is usually bread with cheese-based dips: tuna, pumpkin seed oil or if you’re lucky, tasty liverpaste. Some cellars are bright and sparse with gleaming metal, others are dimly lit, full of ambience and smelling of wine barrels and moist wood. The cellars are open until 9pm, whereby most people disperse and head to a nearby restaurant or pub for a bite to eat and (lo and behold) more wine. 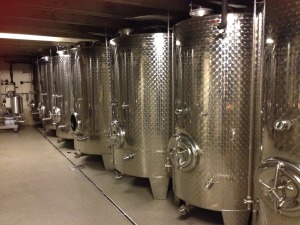 The next morning, you’ll find people strolling about town, in an attempt to walk off the effects of the night before, but mostly just filling in time until they can again start wine tasting! This time of year, the ground is littered with red-golden autumn leaves and the lake is a cold, smooth disc, making for a beautiful contrast. 2015 presented itself as cold and foggy on the Saturday so we rugged up for a brisk walk before taking in lunch (goose is very popular this time of year).

At 1pm a small but lively parade takes place through the centre of town. Spectators line up on either side of the main road to watch vintage tractors carrying various loads of people offering food: hot soup, baked potatoes, bread and meats. Locals carry around trays of small plastic cups filled with the Jungwein (young wine) to taste and of course you’re welcome to throw in a donation. Dotted in between the vehicles are wine famers (of all ages) demonstrating their whip cracking skills. This practice comes from former times when whips were used to scare the birds away from the wine grapes. It’s an impressive (and loud) sight, especially when four or five line up to synchronise their whip cracking!

At 3pm, suddenly the streets empty as the wine cellars reopen for tastings. Being a small town, the 16 cellars are well within walking distance of each other, so it’s often just a quick stroll, or merely ducking next door, to reach your next destination. The cellars are full of lively people chatting, catching up with friends from the previous day or previous years, the wine is flowing and everyone is busily scribbling over their wine cards. This year, Thomas and I chose to finish up when the cellars closed at 9pm, stopping on the way home for Leberkäse, while the rest of our group partied till the early hours of the morning. Quite frankly, after six hours for the second day in a row, I simply couldn’t face the prospect of more wine!

Sunday morning sees the cellars again crowded… but now it’s with people collecting and purchasing the wine. We pored over our illegible wine notes but as usual I let Thomas make the final decisions about which ones to purchase. I did pick myself up a couple of bottles of ‘Eiswine’ which is completely new for me. It is a sweet, dessert wine, and the grapes have to be picked when it is -8°C and are completely frozen. This is definitely something that couldn’t be produced in Australia!

After visiting six or seven different cellars and making tortured decisions on which to buy and which to leave behind (sad, but we couldn’t fit it all in the car), we headed home, back-end weighted by the numerous cases of wine.

Thank you Podersdorf for another brilliant weekend – see you again next year!

One thought on “Day of the open cellar doors… Wine tasting in Podersdorf, Burgenland”