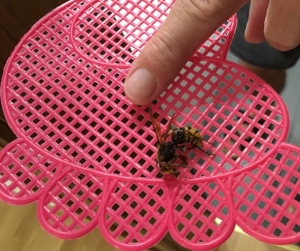 With the end of summer approaching, we finally got around to ordering flyscreens for the windows in our house. A week or two before they were set to be installed, I was nonchalantly brushing my teeth in the bathroom, windows wide open to let out the shower steam, when I was startled by the sound of an approaching 747…

You guessed right – it wasn’t a 747 like I’d initially thought – no it was something much, much worse.

It was an evil hornet.

I had never seen one in action before. Never even really knew that they existed in Europe. I’m quite sure it was aiming straight at me, sting at the ready, full attack mode deployed.

So I screamed. And then I fled.

Naturally hubby came to the rescue and subsequently had to chase the thing around the house before bringing it to a most satisfying demise.

Heart pounding, I made sure the windows were fully closed before resuming my teeth brushing… only to have my heart jump out of my chest again as I heard the imminent approach of another one! Of course, this time it couldn’t get in the window, but it was frightening all the same – not only could you audibly hear it behind closed windows, but that thing bashed its body repeatedly against the glass, as if it specifically had me in its sights and was on the attack.

Hubby to the rescue again, who proceeded to traipse up and down the balcony outside, killing another 3 before calling it a night.

I finished my teeth brushing in the dark.

Hornets, as I discovered, are drawn to the rotting fruit of apple trees, and in the dark, become fixated on light, so although it may seem like they are desperately trying to get in to attack, they are in fact just trying to get to the light.

It did not make me feel any better. Those things are big, fast, loud and have a nasty bite.

It was the end of summer, the nights were warm, and suddenly having our windows open in the evening was not safe. I was quite sure the surviving members of the hive had returned to gather their army and declare war on our house. In fact I had several realistic dreams about it.

Luckily, after a week of hiding out in the dark (the sound as they throw themselves at the glass is to me, terrifying), the flyscreen man arrived and put my fears to rest. And while I wouldn’t say that I’ve overcome my anxiety (dreams still happening), I do feel more protected.

And I’ve also done some googling, and have happily discovered that the poor bastards only live a few months anyway, before the cold kills them off. Well, there is one good thing to come of it – I’m no longer scared of wasps – those slow, quiet, silly creatures – they’re nothing compared to their evil cousin hornets!

One thought on “Hornets – those evil bastards”