In August I was lucky enough to have a visitor – one of my best friends in the world was undertaking her very first Eurotrip and after a 14 day cruise from Amsterdam to Hungary I met up with her in Budapest.

We spent a couple of days in the city before jumping on the bus back to Austria so she could see my home and get to know my home town. Two weeks is both a long time and barely any time to spend with someone. I’ve known this girl my whole life. Literally. We lived next door to each other growing up so once I was born it wasn’t long before we met as babies. And since then, the friendship just stuck. Sure, it drifted apart and back together at times as friendships tend to. But it’s still there, even though thousands of kms separate us, and even though we rarely talk on the phone (we’re text buddies – it’s weird, but we actually just feel super awkward talking on the phone). 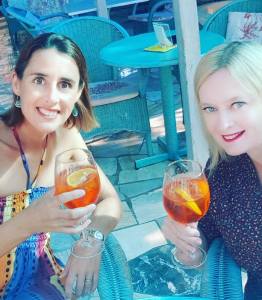 When the two of us get together, we get a bit silly. We revert back to our 16-year-old selves. Not that we haven’t grown up since then, but it’s nice to let your hair down sometimes, regress a little, talk about the past and laugh about the old memories. Cause if life’s not about being silly sometimes, then I don’t really want to be part of it.

It’s nice to be able to be myself, or a version of myself that I left behind in Australia. In Austria I tend to be a bit more conservative – because I’m watching what I say and how I say it, and my German’s never going to be as good as my English. And besides, not many people here really get me, or understand just how hilarious I am (I am, oh I am, you must believe me).

Still, these days, in our 30s, we’re more of the getting up early and going to bed early types than the dancing and drinking all night. Afternoon drinking sessions became the theme of her stay because it meant that we were up and ready the next day with no ill effects.

So what did we do? I showed her the sights of Wolfsberg, we ate plenty of local food, we spent the day at a lake, we went up a mountain, and we wondered at the sparkling jade water of the Wörtersee.

We did a cooking challenge, pastry style.

We played Skip Bo… a lot.

We took a beach trip to Lignano in Italy – and although I had added the possibilities of both Venice and San Daniele – in the end all we wanted to do was lie on the beach and eat pasta. So that’s exactly what we did.

Because that’s exactly what holidays and travelling are all about. Especially when it’s only one or two of you. You have the flexibility to do what you want, when you want. Pay no heed to those that say you must do this or that. I know that a lot of tourist attractions are grand to see, but sometimes it’s the not doing that makes the holiday. So we shopped, we beached and we ate. 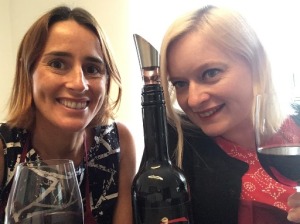 She made it for the tail-end of summer when the days were hot and the night’s still balmy. We rolled back into Austria two days before she left to drizzling rain. But that was ok. There was, after all, plenty of Skip Bo to be played.

And then I got stuck into cleaning the house – because only two weeks later, my parents would arrive!

2 thoughts on “A European holiday with Australian flair”