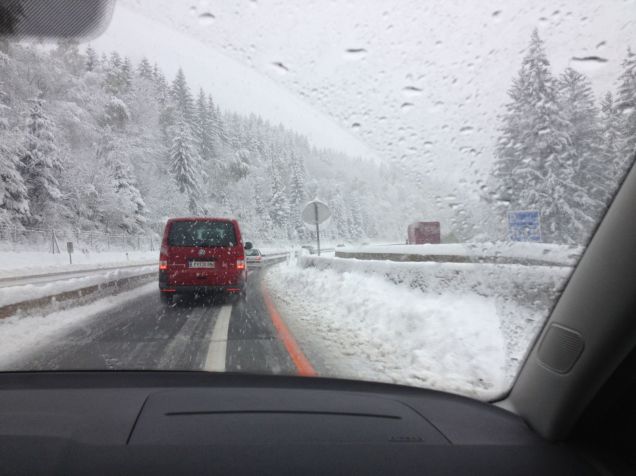 In Austria there’s a saying: April, April, der macht was er will… which basically translates to: April will do whatever the hell he wants! That means in April you can expect weather ranging anything from a sunny 25°C to below zero with snow.

And last week, April, the nasty bastard, did exactly that, surprising everyone with snow.

Around the end of March this year spring pretty much… sprung: birds reappeared, blossoms flew about and fields became floral-wonderlands. The people of Austria thus took action: vegetables were planted, roads ceased being salted and cars were fitted with summer tyres.

And then last Wednesday happened. Thomas had warned me that snow was coming, and I was concerned because to get to work I have to drive up to around 1000m. I had also already changed into summer tyres so if it snowed, driving wasn’t really an option.

I drove to work early on the Wednesday, nervously watching the temperature gauge edge toward zero among a spattering of light rain. At work it began raining steadily around 9am, and turned to snow a couple of hours later. It started as sleet, and then turned into giant, soft beautiful flakes. Even the Austrians were taking photos due to the presence of snow at such a low level so late in the season.

I kept an eye on the traffic cameras on the autobahn, and started to realise that there was no way I would be able to drive home. Luckily I had made an alternate plan, with a colleague who lived nearby (who had thankfully not yet changed out of his winter tyres).

Still, he called me just after 4pm to suggest we leave, because the roads were looking nasty, and it was only getting worse. Of course, Austrians are well used to snow, and the conditions weren’t actually any worse than a snowy winter’s day. The problem was, that with so many cars driving with summer tyres, accidents become much more likely. The roads were also not prepared the way they are in the winter, which leads to more dangerous, slippery conditions.

We were lucky – we got home safely, incident free. Our usual 45 minute drive took almost 1.5 hours, due to the slow speed of the traffic, but at least we weren’t on the other side of the road, which, due to an accident, had been completely closed with a traffic jam backing up for miles.

It was so odd to see such a leafy vista covered in white snow. Because it wasn’t just a light snowfall, it was a decent amount, with temperatures low enough to ensure it didn’t instantly melt away.

The worst thing of course is not the drama of my nail-biting drive home, but what this means for the farmers. Many crops have been completely destroyed and trees that were last week green and leafy are now covered with brown, dead leaves. Maybe they’ll be able to replant some of the vegetables, but anything that was blossoming at the time, like apple trees, are pretty much ruined.

So this April was a win for the lazy – those that hadn’t got round to changing their tyres or planting their gardens. Still, now that it’s May, hopefully we’ll move quickly into summer and maybe the farmers can salvage some of their lost harvests.