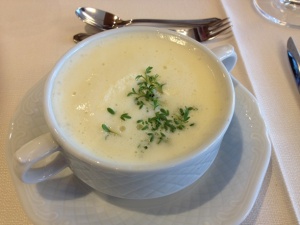 Austrians love their soup. It is generally available at every restaurant and is offered in every ‘daily menu’. If you don’t order soup with your meal, expect to be asked if you want to order it – it’s like fries at McDonalds – would you like soup with that?

I love soup. But for me, some of the soup varieties in Austrian are a little bit odd. 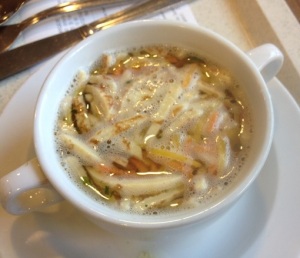 For example, they love to put random things in their soup!

Take any type of broth, fry up some crepes, chop them up and put them in. I understand it’s kind of like putting noodles in a soup, but really? Pancakes… in the soup??

Again, take a broth, and add some deep fried peas like you would croutons – voila – that’s a soup! You can actually buy the peas ready-made in packets in the supermarket – it’s totally weird and very common.

Other random things in soup 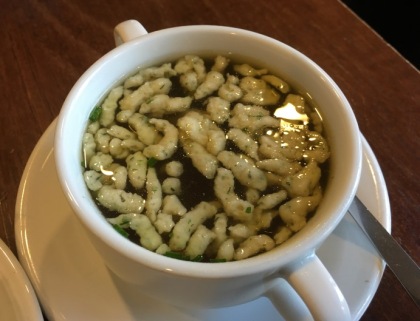 What are those things?? 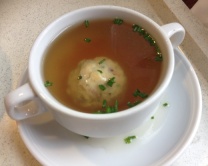 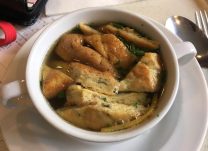 And it doesn’t stop there – they seem to put whatever is just randomly in the cupboard into their soup! All kinds of knödel (like dumpling) – liver knödel, cheese knödel, meat strudel, clumps of polenta, nockerl, schöberl, eintropf… the list goes on, and I can’t even explain what they all are! 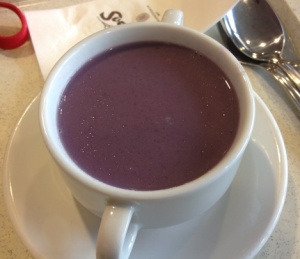 It seems that absolutely anything can be made into a soup, which means they can be wonderfully bright – beetroot soup – spinach soup – carrot soup – the list goes on!

With real cream and lots of it – don’t expect it to necessarily be healthy, but do expect it to taste awesome – mushroom, potato, zucchini, pumpkin – amazing! 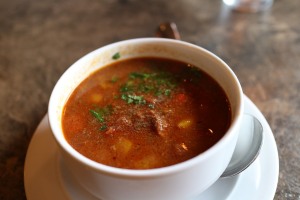 Saving the best for last – just like goulash, but with a bit more liquid. You must eat this with bread, but don’t expect butter – no, you will not receive butter with your bread and soup in Austria.

Ah Austrians… they are weirdos… but generally the good kind of weirdos.

2 thoughts on “Austrians and their love of soups”