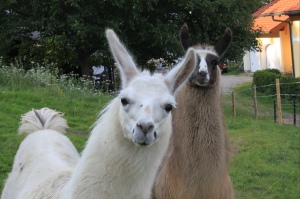 Those were the first words from an Austrian website I found when I googled ‘hiking with llamas’.

But apparently Austria has. In Austria, you can go hiking with llamas. That is, you get a group of people together, someone hands you the leash to a llama and off you go.

Um… anyone else finding this as wacky as me?

Apparently they can carry your luggage… so maybe if you were doing some kind of multi-day affair it would be useful. But for a half-day/day hike… I just don’t really see the point. I can carry my own backpack… and not have a weird, snorting animal trailing along behind me.

According to the website it’s very relaxing and great idea for kids. Yeah… maybe. Me… I’d be happier with a dog…

I guess it’s a tourism thing. And I guess some people go along and actually enjoy it. Where did I get the idea to even google ‘hiking with llamas’ you ask? A colleague of mine recently did it for his yearly team event at work. That’s fine – whatever makes them happy. But for my team events I think I’ll stick to trips to Italy.