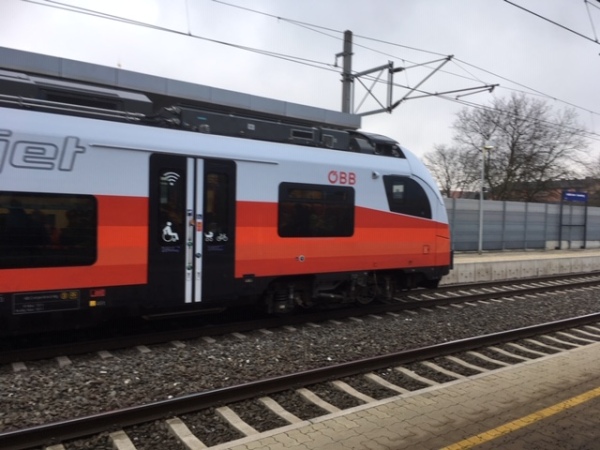 On the day of my work Christmas party this year, it came about that I needed to get from my office into the city on my own steam – eg. sans car. I asked around, but couldn’t find anyone that was heading there at the time I wanted.

Which is actually not hard for my particular route.

But this would be my first foray on the bus in Austria. My first solo encounter with local public transport.

It’s a ridiculous thing to be afraid of. A trained monkey could do it. And here’s me – intrepid traveller – twice solo European adventurer – scared of a damn bus.

But here’s the thing. When I was travelling, I just did what I had to do. I rarely thought about it. Sometimes it was scary, sure, but I got by. And whether it was a fail or a success I would be proud regardless because I didn’t know the country and I didn’t speak the language.

But here in Austria, I do know the country and I do speak the language. And I think herein lies part of the problem. Because if I fail, I won’t just have a laugh at myself and move on… instead I’ll be consumed by that all-too-familiar German-fail futility. You know that voice in your head that says “You are the most useless expat in the world,” as soon as you try to do something in another culture/language and it doesn’t work out.

What? You don’t have that voice?

Don’t worry – I’m all good. But five years on, there are still moments, far too many that I would admit to, that are enough to put me in a flat spin. A “why can I still not order a decaf coffee without being misunderstood?” Or a “Did that guy tell me to follow him or wait here till he comes back?”

In these moments, I do not feel intrepid like I did when I was travelling. Instead, I just feel stupid. I want to cry. Sometimes I do.

Sometimes I still feel like I’m taking one step forward and two back. But other times, it reverses, and then I get the almighty I am a German-speaking Australian-Austrian legend!

Like when I caught the bus… and the train.

I did have some coaching from a colleague. I downloaded an app which gave me the time, the route and the ticket.

But I sweated buckets the entire morning at work. I actually had to change my top.

But I was ready.

After some initial panic at the bus stop that I was in perhaps the wrong place, up rolled my bus and along we went. Some further panic ensued when I realised that a bus does not stop at every stop, so how would I know when 11 had passed?

I watched myself as a blue dot on Google maps until I was quite close to the right train station, and then I even found the button to stop the bus. I found the correct platform at the train station, proceeded to panic a little more at a sign that made me think I was on the wrong platform, despite much evidence to the contrary. Then I waited 15 freezing minutes in below zero(by far the worst part). And along came the train. My ticket even got checked,and I handled it completely fine… in German. And then I got off at the main station and trundled off to my hotel.

Where I proceeded to check in completely in English. Because… well by then, I’d had enough adventure for one day.