During our recent trip to Australia, hubby suggested we take some time out for ourselves to see a little bit of the country. When you use up a big holiday period to visit home, it’s often hard to see it as a holiday, as opposed to hopping between the same places and people each time.

The place that came to mind instantly (remembering that we have to be practical, we can’t venture too far from Melbourne), was Halls Gap, a place where I used to go camping with the family as a kid.

Halls Gap is a small town situated in the picturesque Fyans Valley in the Grampians National Park, which is known to the aborigines as Gariwerd. Steep escarpments of rock, cascading waterfalls and tree-covered hills explode all around. In summer it’s hot and dry and smells of gum trees and heat and dust. It smells like a part of my childhood.

After some deliberations we chose to stay in a cabin at the local caravan park. There are plenty of nice places to stay in the area, and some of them very luxurious (and therefore tempting), but for nostalgic reasons we stayed in the same place I had as a kid. The caravan park is right at the base of the most popular walks, with kangaroos and other wildlife abounding. 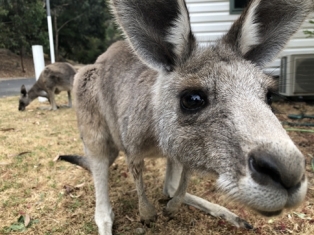 Unfortunately we arrived in Australia to a country under siege from bushfire. I carefully scanned emergency reports in case of fire danger. At these times, it’s just not worth the risk. We were clear, so off we set for our three nights.

The town of Halls Gap was smaller than I remember (last time I was there I was probably 12), but no less charming. It’s the usual hustle bustle of pubs, cafes and shops selling homemade ice cream and fudge and Aussie souvenirs.

We ate dinner to the manic laughing of kookaburras and awoke to the jarring screeches of cockatoos. At dawn and dusk kangaroos hopped lazily out of the bush, curious but careful. One of the biggest attractions of the Grampians are the hikes, and on our first morning we set off to tackle the popular Pinnacle lookout via the Wonderland 10km loop. This walk takes in Venus Baths and winds around to the Wonderland carpark before heading up to the Pinnacle and its spectacular views.

Since I was only a kid when I last visited, it was hard for me to see what had changed. I suspect there was far less structure when I was last there, less guard rails and signage. I pointed out the Elephant’s Hide to hubby, a steep rockface that my dad used to take my brother and I up when we were kids as an alternative route to the Pinnacle. Looking at it in retrospect, it seems a bit crazy for an 8 year old to tackle, but we have old pictures that definitely prove I was there. I remember dad having to carry me over the small stream that rushed down the rocks because I was too small to jump it myself. The Elephant’s Hide is a big part of my memories as a kid, and while I would have loved to climb it, there were never really any signs showing the way, and without my dad to guide me, I figured it was best left alone. 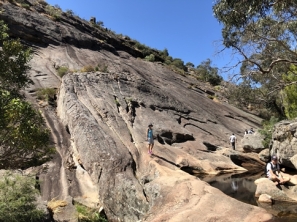 Another big part I remember is the Nerve Test – a terrifying walkway of rocks suspended high above the ground. I was convinced, however, that in visiting it as an adult I would realise that it wasn’t scary or high at all. Yet I was wrong on this account. It was still as terrifying as I remember. My dad used to waltz on out to the end like it was hopscotch, and I’ve got photos of me part way along, though I was crawling most of it I suspect. 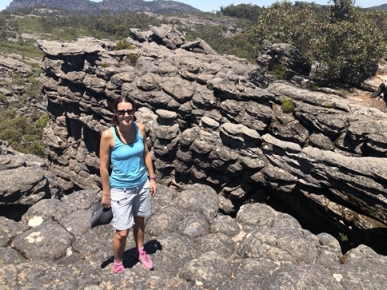 We had one more day so decided upon the walk to Boronia Peak – starting from the caravan park makes it almost 10km and although the view is spectacular (and includes some fun rock scrambling to ascend to the peak) the walk is much less frequented than the renowned Pinnacle. It was nice to only see 2 or 3 other people as we headed on our circuit up and down.

We only had three nights, so working out where we would eat was a hard decision. The first night we ate at the relatively new Flame Brothers on Stoney Creek, the second night we cooked ourselves a sausage-in-bread feast on the outdoor BBQs at the caravan park, and we also sampled the samosas at the local Indian restaurant (which were great and if we’d had another night this would have been our pick).

However by far our favourite place was where we ate on our last night, at the Halls Gap Tavern. It may not be the fanciest place in Halls Gap, but it’s a proper, good, Aussie pub, with a basic outdoor garden to sit in, proper good pub food and importantly for me… cider on tap! We enjoyed pre-dinner bevvies each night anyway.

The Grampians National Park is a beautiful place to visit, and there are walks for all levels of fitness, and you’re pretty much guaranteed to see scores of kangaroos and other Australian wildlife.