My first Austrian wedding was in May. The weather was cool, but sunny, the bride looked beautiful and it was heaps of fun.

If you get married in Austria, be prepared to be woken up… early. Your so-called ‘friends’ will come round to your house between 4 and 5am, with crackers, banging all sorts of things, playing music etc etc. They will continue to do so until you get up and let them in, then everyone will get festive, dance as the sun comes up and share breakfast together.

By law, in Austria, you have to marry legally in the city hall. Once that’s done, many couples also opt for a second, traditional church ceremony as well.

There’s little ceremony for this part. The official goes through the process (there’s no grand walking down of the aisle) and the couple says ‘I do’, kiss and everyone claps. It’s nice and quick.

Drinks on the Best Man

Once the married couple head off to get photos taken, the guests meet in a local bar/restaurant and have a drink together, apparently at the best man’s expense. Sucks to be best man in Austria!

Convoy Driving & Trouble Along the Way

Everyone meets again after the photos and drives in convoy behind the bride and groom to the reception location. Tooting horns is common place – everyone gets involved around here! One thing I’m told happens sometimes (though it didn’t happen at this wedding) is that someone will be ahead of the procession and will block the road. And yes, that means block everyone, not just the wedding party – with a tree, or some legitimate roadwork signage. Apparently it’s widely accepted in Austria that if you find yourself behind a wedding convoy you may be delayed. But it’s all good – everyone gets out of their cars, the schnapps is poured and the merriment starts.

Once the road is unblocked, on you go to the reception. More photos are taken, some kind of lunch is served and it’s time for the first wine/beer.

Then there’s the traditional ceremony in the church. This is much like a standard church ceremony – walking down the aisle, live music, communion etc etc. The one I went to was maybe 45 minutes or an hour, with music and prayers etc… just in German. Oh, and the priest sang sometimes, and there was a guy at the back that banged this weird chime thing every now and again.

But the best bit was at the end. When we left the church we all had a glass of wine together. Yes, drinking… in a church. Felt weird, but I went with it.

After this dinner is served. Yep, straight away. I guess it was about 5 o’clock, but it’s normal to eat dinner early in Austria. And unlike weddings at home, you usually have a choice of which meal you’d like, not just the standard alternate steak and fish.

Following that, everything is pretty much the same for a while… speeches, a band plays music, dancing etc.

At some point in the night, the best man ‘steals’ the bride’s bouquet. The bride must then go with all the men, to a separate room where they basically get her drunk and make her dance on the table with everyone. And sing all kinds of weird German songs.

At the same time, the girls steal the groom and do the same thing with him, except we’re allowed to also partially undress him and wear his clothes.

Then the parties join back together and more dancing ensues.

Almost the best part of the night for me was at about 1am, when I sat down for a break from dancing and was feeling a bit tired, a bit drunk and wondering when it would all end. That was when someone turned up and took orders for Goulash soup! So with my second wind I got back up on the dance floor and drank some more. 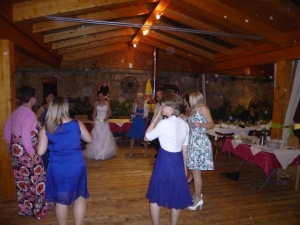 Austrians know how to Party Hard

It’s common for a wedding celebration to go until 4-5 or later in the morning. And don’t be fooled by couples that usually like to retire to bed early… they save all their strength for special occasions. I think I pulled the pin around 2am but it went on a lot longer.

It’s safe to say I wasn’t feeling the best in the morning, but it was an awesome, albeit long, day/night.