When I made the decision to remain, for an unspecified amount of time, in Austria, I broke a promise.

Most of the promises in the two page document I presented to my parents at age 22 I stuck to:

And then there was the final one – the one I broke.

To be fair, I stuck to it for many years. The Captain moved around the suburbs of Melbourne as I did and he was fully integrated into my life – camping holidays so he could join in, accompanying me to friends’ houses for walks or dinner – he was a regular on the trains of Melbourne! I fed him, walked him, bathed him, crushed him with cuddles and trained him sporadically. And he was a crazy little bastard – being part beagle – but he had my whole heart.

It was a number of years before we got him under control – not all thanks to me – we foiled dozens of escape plans and I was called countless times to collect him from his latest Houdini effort. Concrete, electric fences, training and twice daily walks eventually kept him in check. Captain was always a happy dog – he just was very curious – he wanted to see and do everything – he wanted to be with people almost as much as with dogs. But he was smart too, and once established, he knew his boundaries, even if he did test them every now and again.

The guilt I felt at leaving him in Australia was palpable. Full of remorse, I chose my future husband over my dog – but come on – a dog can’t fulfil all a girl’s needs.

And yes, it would have been possible to bring him with me. But what was more humane – subjecting a 10 year old dog to a 24 hour+ flight that he would potentially not survive? Or leaving him behind? I tearfully explained to my parents that I would rather find him a new family than make him endure the flight. And while getting a dog into Europe is quite straightforward, trying to take him back if I returned to Oz would have been a nightmare!

I was lucky – my parents opted to keep him in the family, and so I receive photos and updates all the time: what disgusting food he ate today, how he’s developing a palate for the green beans in the garden and how much he’s learning to love swimming at the beach.

But the guilt at leaving my baby still remains. We were best buddies for most of my 20s – we laughed together, we cried together, we cursed men together – ok, I did that while he wagged his tail happily.

I do plan to get another dog someday, but somehow I feel like it would be betraying him to do it while he’s still alive. And I don’t take the responsibility of dog ownership lightly. Next time I want to make sure I keep all my promises. 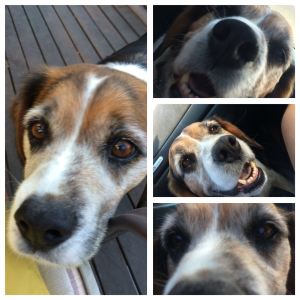 But chance meeting my husband overseas and moving to Austria was never, in my wildest dreams, part of any plan I had ever conceived of.

And so in the end I know I did the right thing. We had 10 great years together – and now he’s older, more docile and keeps my parents company. He recently turned 13, unthinkable considering how many near misses he’s had in his life. But he’s a fighter, and he’s happy, and no matter what happens, he’ll always be my baby.

6 thoughts on “Breaking a promise”