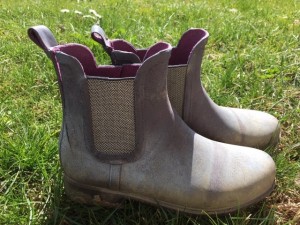 It’s not terrifying to put on a pair of shoes you’ve left outside.

I left my gumboots outside for the entire winter in Austria this year… and when it came time to trudge around again in the freshly-muddied veggie patch, I just put my socked feet straight into them…

There were no thoughts of but what could be in there.

No chance that a hiding spider lurking within might kill me.

In Australia shoes need to be kept inside, preferably in a cupboard, to be protected from spiders and weird creepy-crawlies… and even then… I would seriously consider feeling around with a gloved hand if they’d been in storage for a while.

Yeah… I guess an Austrian spider or something else random could have made his home in my outdoor living gumboots, but what does it matter? It can’t kill me. There were a couple of random bits of dirt I ended up tipping out, but nothing else. I guess everything was still in hibernation!