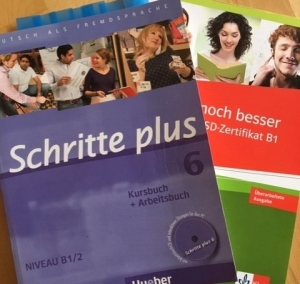 The start to my German learning was intense, with private lessons a couple of times a week for the first year I was unemployed in Austria. After I passed the A1 test and got a full time job, I also dropped my lessons, but I dutifully continued studying, almost daily, on a strict regime that I stubbornly adhered to (well, mostly).

My plan was to work through the necessary six books in my own time and reach B1/2 level. It was partly because I needed a goal to work toward, and partly because I’d heard that B1 was necessary at some point for my living in Austria arrangement.

When I’d almost finished the last book (almost five years later), I was struggling – it was getting damn hard. Hubby was helping me, but he didn’t have all the answers to the questions I had. A native German speaker can easily tell you if something’s right or wrong, but when you’re learning, sometimes you need to know why.

So, faced with an upcoming visa renewal in October, I panicked and enrolled in some lessons. Even though I’d been told by others that I was definitely past B1 level, since I wasn’t able to finish the book, they were obviously wrong.

I live a good 45 minutes away from the closest big city, so I opted for private online lessons. I really think that working a full day and then heading off for a German lesson would have been too draining. After my trial lesson with the lovely Savica at German Online Institute, I was hooked.

I quickly realised that I wasn’t as terrible at German that the final book had made me believe, but the lessons were a great confidence booster. I purchased a B1 study book and worked through that with Savica, flying through the reading and listening exercises. After some more research I discovered that while the jump from A1 to B1 isn’t terribly big, the jump from B1 to B2 is monstrous… and apparently my books had delved into the B2 curriculum, which is why I’d initially panicked.

I signed up for five lessons originally thinking that would be enough (it would have been), but quickly added another five when I realised I was actually having fun learning. Sure, it was a tough hour having someone constantly correcting you, but I also realised that I was actually improving.

The good thing about online lessons is that you can do them anytime, well, anytime you and your teacher are free, that is. Which meant that if I couldn’t spare the time on a Friday I could move my next lesson to a Tuesday, or a Wednesday… and so on. Savica prepared me thoroughly for the B1 test, and though I can’t say for sure that she’s completely unravelled my confusion with when to use Dativ and when to use Akkusativ, I’m on the right track.

If anyone needs good German lessons and wants the flexibility of online I can highly recommend the German Online Institute. I paid €25 for a private lesson (in a block of five) which I think is pretty good considering how much private lessons can cost.

Now that the test is over I’m taking a break from German for the moment. I will come back to it, and I fully intend to come up with a study plan that is perhaps not quite rigorous as what I’ve been doing since I moved here, but it’s good to keep it fresh. Still, for the time being, I’m going to enjoy the summer, try and speak more German, and go from there. Who knows, maybe one day I’ll decide to knock B2 out of the park! And I still have two lessons up my sleeve, so I’ll probably annoy Savica after summer… maybe I can finally finish those pesky last few exercises that eluded me!