Austria is well known for many different types of food – some you will definitely have heard of: strudel, schnitzel, goulash etc. Each region also has specialities they call their own. Though consider that Austria has nine states in a total of 84,000km² (compare that to Australia’s 8 in 7.7million km²) – this means that a dish ‘local’ to one area is very often found in other places too.

We’ve already talked about Kärntner Nudeln and Glundner Käse and this week I’m focusing on Jause.

This is one of the first things I take people to eat when they come and visit because it’s so Austrian and is especially popular in summer when all the farmers’ huts are open. I would liken it to a ‘Ploughman’s Platter’ in English, but it’s basically a plate filled with sliced meats and assorted accompaniments. This is served with sliced dark bread, and then it’s up to you to create your own tailored meal.

There will generally be a few types of meat – ham, roast pork and salami are pretty standard – often there’s butter and dips as well… and of course in my area the classic Gelunder Käse… which my husband pounces on first. I leave the weird cheese and go straight for the pate – butter, pate and pepper, I’ve learned, is one of my favourite combinations.

I remember the first few times I ate this as a share plate (you can also order it as a single bread, with toppings pre-prepared) – I just stared at it, having no idea what to do, and then waited for everyone else to take a bread so I could copy what they did. How should I know that ham should always be teamed with horseradish and that pate tastes great with pepper? Of course, after a few times I got my confidence up and now I’m all over it. Though I have to say, I probably still eat it ‘weirdly’ but that’s fine with me. And as long as it’s tasty, who cares.

I’m a big fan of the sours – gherkins and cucumber and paprika – I like to start with the paprika dip, add salami then top it with as many pickled gherkins as I can get my hands on. And every now and again I take a piece of egg and tomato… just so it feels well rounded.

To be honest, Jause is not my number one going out meal to eat, which is sad for my husband, because he would order it every night. In fact, it’s a pretty standard thing for Austrians to eat in the evening, since they tend to have a big meal at lunch followed by something small later on. Me… I can’t get my head around the fact that I’m essentially having a sandwich for dinner. Still, it’s a great, easy snack you can have anytime, and I’ve just learnt to focus on the meat and accompaniments rather than the bread, otherwise you’re full before you start on bread number three! 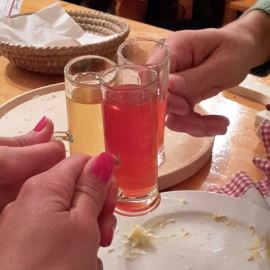 When I take my visitors to eat Jause, I give them a quick introduction so they don’t feel as lost as I did the first time. And afterwards, there’s nothing wrong with a shared Krapfen for dessert and a schnapps to wash it all down. If you’re in Austria you should definitely give it a go… and don’t worry, even if you think it’s not much food when it first comes, somehow there’s always plenty left to take home at the end!