Austria is well known for many different types of food – some you will definitely have heard of: strudel, schnitzel, goulash etc. Each region also has specialities they call their own. Though consider that Austria has nine states in a total of 84,000km² (compare that to Australia’s 8 in 7.7million km²) – this means that a dish ‘local’ to one area is very often found in other places too.

Carinthians love Kärntner Reindling, and I’m definitely on board. While it’s traditionally served at Easter, it’s available year-round in stores and bakeries. Reindling is a sweet, soft bread, baked in a specially-shaped dish and packed with sultanas and cinnamon.

But while I just referred to it as ‘bread’, I’m actually a bit torn as to whether it better fits into the ‘cake’ category. Because while it’s fat and soft, like bread; melted butter and sugar on the top gives it a sweet, sticky, caramelising glaze… something that’s more typical of a cake. 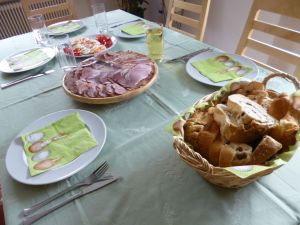 The thing I liken it most to from home is raisin toast, which is one of my all-time favourites. I’ve been known to toast up a slice of Reindling and coat it with butter, just as I would raisin toast. Naturally this raises many Austrian eyebrows, who prefer to eat it plain as a snack, or with ham at Easter.

I’m not a huge fan of teaming it with ham, but that’s their business. I prefer to enjoy a slice with a cup of tea in the morning, or to eat it as an after-dinner treat. Like many cakes and breads, it’s best fresh out the oven (my  mother-in-law’s oven, of course – I’m not up to Austrian baking yet).